3 practical ways to improve your ideas and get buy-in

Latest Podcast Episode: 3 practical ways to improve your ideas and get buy-in

Good leaders are great influencers. Here’s how to become one. 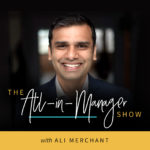 All in Manager
Good leaders are great influencers. Here's how to become one.

I’ve been working since 1997. I’ve yet to meet a good leader who wasn’t good at influencing others. Pretty sure that person doesn’t exist.

If you’re leading a team or an organization, a significant part of your success depends on influencing others to get their buy-in. Everything becomes more complex if the people who are supposed to follow you, don’t want to follow you anymore. (AKA: You’ve lost influence)

Learning to influence is a leadership skill anyone can master. It takes time, patience, and practice.

Let’s start with what you don’t want to do. Some leaders use their power to get people to follow them. This antiquated command and control approach to influencing relies heavily on “telling” people everything. I remember working with a boss who lived by one rule: “I know best”. There was no room for a healthy debate or discussion with him. When he would ask questions (an uncommon occurrence), he would rarely listen.

The sad thing is this type of fear-based approach of influencing works, but it only works in the short-term. Because humans get tired of being “told” what to do all the time. We need autonomy to thrive.

The other approach is the opposite of “telling”, it’s influencing others by building consensus. It’s learning to get curious by listening and asking thoughtful questions. Another boss of mine would do this really well. Instead of defaulting to “telling-mode”. She would frequently ask our opinion:

Great leaders like my boss don’t just ask questions all the time. They learn to balance the “ask-with-the-tell“. While they lean towards asking they don’t shy away from telling and being direct. There were many occasions when my boss would use statements such as:

“I disagree with this approach.”

She was balancing telling and asking.  Leading people is messy and there’s no magic formula. A good guideline is to optimize for curiosity over judgment. Leverage the wisdom of your team by asking lots of questions. Once you get them to share, then either set a direction unilaterally or better yet co-create a direction with them. That’s how you get their buy-in. The trick is to never stop asking and at the appropriate time start telling.

Be the first to know!

Custom designed training for busy managers like you.
1 week. 5 e-mails. 1 minute per day.

GET STARTED WITH A FREE COURSE

Ready to become a better boss?

Before we send you the FREE course, select the option that best describes you below.

FOR NEW MANAGERS   FOR SENIOR LEADERS

Learn How to Become a Great Manager in only 5 Days!

Learn How to Become an Influential Leader in only 5 Days!

Want a step-by-step guide to delivering feedback that actually works!