3 practical ways to improve your ideas and get buy-in

Latest Podcast Episode: 3 practical ways to improve your ideas and get buy-in

These Listening Habits Are Holding You Back

You never forget a good listener.

To be truly heard by someone, especially if they’re in a position of authority, is arguably the highest form of respect. If you’ve been around a great listener who also happens to be your manager, you know you’re in rare air.

Great listeners elevate us. They make us feel important and transform the conversation completely. You never forget a great listener and the indelible impression they leave behind.

Having spent significant time with executives, I find that a number of them struggle with the act of listening. I’m also convinced that the skill of listening is what separates a good leader from a great one.

To improve your listening skills, the first step is to recognize unconscious habits that are barriers to effective listening and then gradually replace them with healthy listening practices.

Let’s start with 3 listening blockers that might be holding you hostage:

As a leader, you’re rewarded for speaking up and providing answers. After all, you’re more experienced than your direct reports and are routinely asked for your opinion. However, the habit of constantly answering diminishes people around you. This habit also tends to severely affect your level of influence the higher-up you go. Next time you find yourself in a meeting, pay attention to the most influential person in the room and observe how often they jump in and how often they take their time to listen and ask thought-provoking questions.

Most leaders have a lack of time and a surplus of tasks. This imbalance leads to chronic multitasking. Checking email while talking to others, not paying attention during meetings, and daydreaming about problems while others are talking are common examples that erode listening. In addition to these distractions, the voice inside your head is a relentless talker and can be a significant barrier to paying attention. Occasionally, your internal volume is louder than the person you’re talking to, making it impossible to listen. This small but mighty voice interferes with one’s ability to truly tune in and connect.

Even well-intentioned leaders get anxious if the conversation is heading in a different direction than they had hoped for. This anxiety leads to unintentional and, in some cases, intentional bursts of interruption as a way to redirect the conversation and its outcome. The fear of not being able to control the narrative is a major source of a poor listening habit.

Now that you’ve recognized your habits, its time to replace them with corresponding practices:

I’ve worked with too many leaders who might lack context on a particular situation, but are comfortable saying: “This is how we’re doing it.” If you find yourself relating to these chronic fixers, here’s an experiment to try today. When the urge to jump in strikes, try doing the opposite instead. Suspend your opinion just a little longer and ask a follow-up question, such as, “Tell me more.” Act like a coach rather than a player, and you’ll not only become a good listener but a strong leader too.

Our cell phones are designed to keep us hooked. To fight this distraction, try putting away your phone. If you’re unable to untether yourself from your device, turn it off. If that’s too risky for you, turn off the Wi-Fi signal so you can give your undivided attention to the person across the screen. The first couple of times will be challenging as you begin a new practice, however, your persistence will result in a new you: a calmer, more present leader and listener.

The more you learn to deliberately listen to others, the more they’re inclined to listen back to you and buy into your agenda. This psychological quid pro quo is called the concept of reciprocity, a key indicator of influence. When people feel heard by you, they are more willing to open up, share and reward you by paying attention to your points. However, the opposite is true as well. When people are interrupted, they either lose interest in the conversation, or worse, they raise their voice and everyone loses out as a result.

As a leader, realize that your vantage point is very different than that of your direct reports. You have a telescope (vision) and they have a microscope (details), hence they see and hear things you’re unable to and vice-versa.

For you to lead a highly successful team, you can’t solely rely on information that you possess. For optimal decision making, you have to listen to what’s being surfaced by your team and find a way to marry your information with theirs. This allows for a richer outcome and, in all honesty, a better world.

Be the first to know!

Custom designed training for busy managers like you.
1 week. 5 e-mails. 1 minute per day.

GET STARTED WITH A FREE COURSE

Ready to become a better boss?

Before we send you the FREE course, select the option that best describes you below.

FOR NEW MANAGERS   FOR SENIOR LEADERS

Learn How to Become a Great Manager in only 5 Days!

Learn How to Become an Influential Leader in only 5 Days!

Want a step-by-step guide to delivering feedback that actually works! 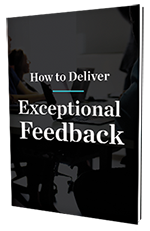